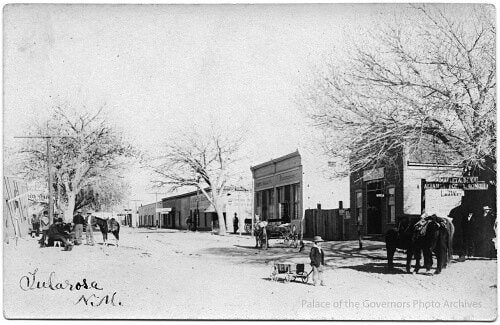 Tularosa was named by the Spanish conquistadors for the rose colored reeds growing along the banks of the Rio Tularosa. In 1860 Hispanic settlers attempted to form a settlement in the area but were unsuccessful due to Apache raids. After the battle of Round Mountain two years later, a settlement was formed. In 1863 the town of Tularosa was formally established and the Mission Church St Francis De Paula was built. The image shows the main street in Tularosa from the late 1800's - early 1900’s.  Source: Old New Mexico Facebook page.

Presidents Day, Feb 19, 2018: Thank you President Taft. On January 6, 1912, after years of debate on whether the population of New Mexico was fully assimilated into American culture, or too immersed in corruption, President William Howard Taft twisted arms in Congress and it approved admission of New Mexico as the 47th state of the Union.
Tularosa Historical Museun
http://www.facebook.com/TularosaVillageMuseum
TULAROSA, by Jane Clayton, Tularosa High School, 1935
To the first arrivals, it was an oasis in the desert - their “Promised Land”. They had heard tales of the country of much water, and here it was! It
was not a particularly green spot, but there were many, many tubas, which accounts for the name “Tularosa”.
It was thought that in the latter part of the 17th century several Mexicans came to the Sacramentos for lumber. This was based on an old church in northern Mexico which is partially constructed with timber that grew only in these mountains. They left no trace of their invasion, however.
In 1860, the first attempt was made to settle this territory. A small number of men came from the Rio Grande Valley, and lived here long enough to raise some crops on what is now known as the Baird place. When harvest came, though, the Apache Indians rode down, drove off everyone of the settlers, and rode back - with the harvested crops! Undaunted, the same ones organized a larger group to attempt another settlement the following year. There were about 100 men the second time who came through the pass between the San Andres and the Organs, from Las Cruces, Yeleta, and parts of Texas.

Trouble with the Apache Indians of the Mescalero reservation started with the arrival of the sturdy little group. The Mexicans had organized some semblance of municipal government before beginning their journey, and it was necessary to put it into use immediately. Sesario Duran was the first justice of the peace, or “Alcalde”, and had as his assistant a sheriff, Jose Candelario. As is true now, there was very little trouble in the town itself. It was necessary that they conserve all their strength against the constant trouble with the Indians. It wasn’t bloody battles, but little petty thieving bands that caused so much annoyance to the settlers.

One of these episodes occurred after the arrival of the families in early spring. The women of the town were trying bread in their little high-windowed huts when they were interrupted by the Indians who amused themselves by sticking long sticks through the windows and confiscating the bread. After all the bread had been eaten, one still hungry chief tried to squeeze through a small window, much to the concern of the defenseless women. One brave woman finally seized a bucket of hot lard and threw it on him. His screams frightened off the others, but not until they had taken all the cattle and horses from the village. The men followed them immediately, however, and got back all the stock.
In another instance, four oxen are stolen by the Indians. Upon pursuit, they killed the animals rather than let the settlers recover them.
Several sheep herders were killed near Round Mountain, hence its first name, “Dead Man’s Hill”. It was not until 1868 that comparative peace settled between both groups.

The last battle was the Battle of Round Mountain, and took place about ten miles east of Tularosa. A settler from town had gone up into the hills for some wood, and as he returned a few of the soldiers stationed at the Blazer farm saw a band of Indians moving westward after him. Four of the soldiers left immediately to warn the settlers. The four soldiers and 26 enemies met at Round Mountain. The Indians attempted to surround the Mexicans, but the settlers retreated to the eastern side of the mountain, cut off from water and food. After hours of indifferent warfare, almost to the point of surrender, a heavy cloud came over the sun just long enough for Cosemiro Romero to slip down to the canyon for water, and put off the hour of surrender. Just then “Evil Spirits of white ghosts” arrived on white horses. It was the American soldiers from Ft. Bliss. Not a single person on the Mexican’s side was killed. One man, Nieves, carried an arrow home through his shoulder, the battle occurred on April 17th, and a peace treaty was signed at Ft. Leavenworth on May 29, 1868.

The first child, Maciniano Carillo, son of Santos and Paula Chaves Carillo, was born the following year, 1869.
By 1874, the first Anglo people had come: Tom Sitton, Jim West, John Walter, Welie Fields, pat Coghlan and Patterson.
They had mail service even then, brought across the plains through San Andres and Las Cruces, “Tri-weekly”. Elmer Blazer remembers: “They tries to get through without being scalped, and tried to get back within the next two weeks!”
In 1875, President Grant granted 320 acres, 49 blocks, to the village of Tularosa. The town proper was laid out by Pablo Milendrez. Their tools for surveying were a long willow pole with pieces of rope tied together for a chain, and the North Pole. On each corner of the town, which was square, was a large homestead. The northwest corner was owned by Duran, the northeast by Chavez, the southeast by Nicholas Saez, and the southwest by an anglo woman (whose name we could not learn).

In the very beginning, agriculture was the only industry, and they had very good rains their first years. Trees were planted, and Tularosa began to live up to her name of “Oasis”, used by Eugene Manlove Rhodes in his fictional stories.
The first tree, although opinion very, was planted in 1864, north of Jose Duran’s home, and can be seen from the highway, going north around the first big curve.

Immediately after the battle of Round Mountain, the Catholic Church was started. The women made the adobes and carried them on their back to the men, who did the actual building. It was finished in 1869, and their first priest, Francisco Estregillo, came from Lincoln, New Mexico.