Coming soon…a video produced by alamoinews of the Luminarias in Tularosa.

If you have a Facebook account, click on the picture below and learn more about the story behind the Luminarias in Tularosa. If you have an Amazon Prime account you can watch the same video titled Experience New Mexico. 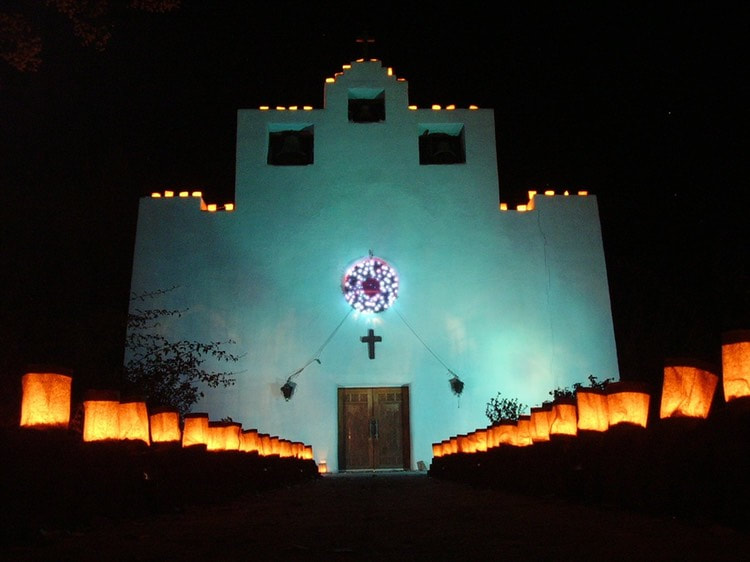 The following excerpt was published in the Desert Exposure December 2017 Edition and was written by Jen Gruger, TAHC Vice President/Secretary.

Volunteers come together to bring little bags to light
​The luminaria display on Christmas Eve is perhaps Tularosa, New Mexico’s best-known treasure.  This one-night-only display of light, love and tradition is one of the best parts of the holiday season in the Tularosa Basin.

Thousands of luminarias are displayed throughout the Village on Christmas Eve.  A luminaria, in case you just moved here from Ohio or another country altogether, is a candle carefully set in sand inside of a paper bag and lit to create a warm glow at night.

There are sometimes conflicting opinions about the correct use of the term “luminaria”.  Most of us refer to the paper bag lantern in this way, but traditionalists insist the correct term is ‘farolitos.’  Historically, a true luminaria is a series of small bonfires lining the road.  According to tripsavvy.com, luminarias have their roots in the 1800s. Originally, small bonfires were used to guide people to Christmas mass.  Often, they are associated with the final night of Las Posadas, which is the symbolic representation of when Mary and Joseph were seeking shelter in Bethlehem, walking from home to home for a place to rest.

For about 20 years, most of the luminarias displayed in Tularosa were supplied through a cooperative effort between the Tularosa Chamber of Commerce and the Village of Tularosa.  The Amigos Club ran the program prior to that.  The Village and the Chamber began to fatigue, and the Tularosa Arts and History Council (TAHC) was asked by the Village in 2016 to ‘take over’ the project.  “This is one of the oldest Christmas programs in Tularosa.  New Mexico Magazine has done numerous articles on this and it is a way to celebrate the season that should be continued” explains Don Powell, Chairman of the now inactive Chamber and a TAHC board member.  With Powell’s support and a financial donation from the Chamber to the TAHC to help with the cost of the supplies, the TAHC board voted to formally take over the project starting in 2017.  TAHC Treasurer, Lynette Wedig said “We determined it was in line with our mission to ensure the tradition continues and it is an honor for us to keep this bit of Tularosa’s history alive.”

All of the same players remain engaged but are organized, guided and aided by the TAHC Board and membership. Ralph Otero, Facilities Manager with the Village of Tularosa, who has been key to the distribution of the materials for over 20 years, will continue to distribute the luminaria sacks and candles out of the Tularosa Community Center one last year.  Otero has been working on Christmas Eve for every one of those years to provide access to last-minute luminaria buyers. The TAHC hopes to make sure he doesn’t have to do that this year and will be looking for a new distribution point for future years.

High School students, 4-H members, FFA participants, and Rotary Club of Tularosa volunteers, along with other volunteer community members and Village employees start early on Christmas Eve day setting out the luminarias along Highway 54/St. Francis Drive, from one end of town to the other.  Businesses and residents throughout the village also do their part by lining them on their rooftops, driveways and storefronts.  Close to dusk, more volunteers are needed to light the candles.  This display takes dedication and determination. It is laborious and tiring, but to the residents and to the visitors, it is worth every minute.

The Tularosa Arts and History Council or “TAHC” is a non-profit 501 (c) 3 organization formed in October of 2016.  Membership is open to anyone who shares our mission which is to increase awareness about the rich history and talented artists in and around the Village of Tularosa through events that support art, history and culture, thereby drawing businesses and visitors to Granado Street and surrounding areas.  Specific focus includes youthful artists interested in developing art as well as finding ways to encourage the passage of history and the culture of Tularosa from one generation to the next through the telling of life stories.

For information about the Luminaria Project or the Tularosa Arts and History Council, like us on Facebook or call Jennifer Gruger at (505) 710-2924.

Please, don’t forget to slow down to 15 mph when you come visit and watch out for Santa who will be escorted through town by the Fire Department sometime after dark!